This is part 1 of 2 in an article series on pulley injuries. Click this link to read part 2 of 2.

If you’re a climber, chances are you have either had a finger injury, or at least you know someone who has had one. According to the research literature, namely Doctors Volker Schöffl1, Alex Folkl, and Erik Gerdes, finger injuries are the number one culprit, with A2 pulley injuries being the most common.2–4 In this two-part article, I’d like to shed some light on:

Due to the overarching prevalence of A2 pulley injuries, this two part series will focus on these injuries. 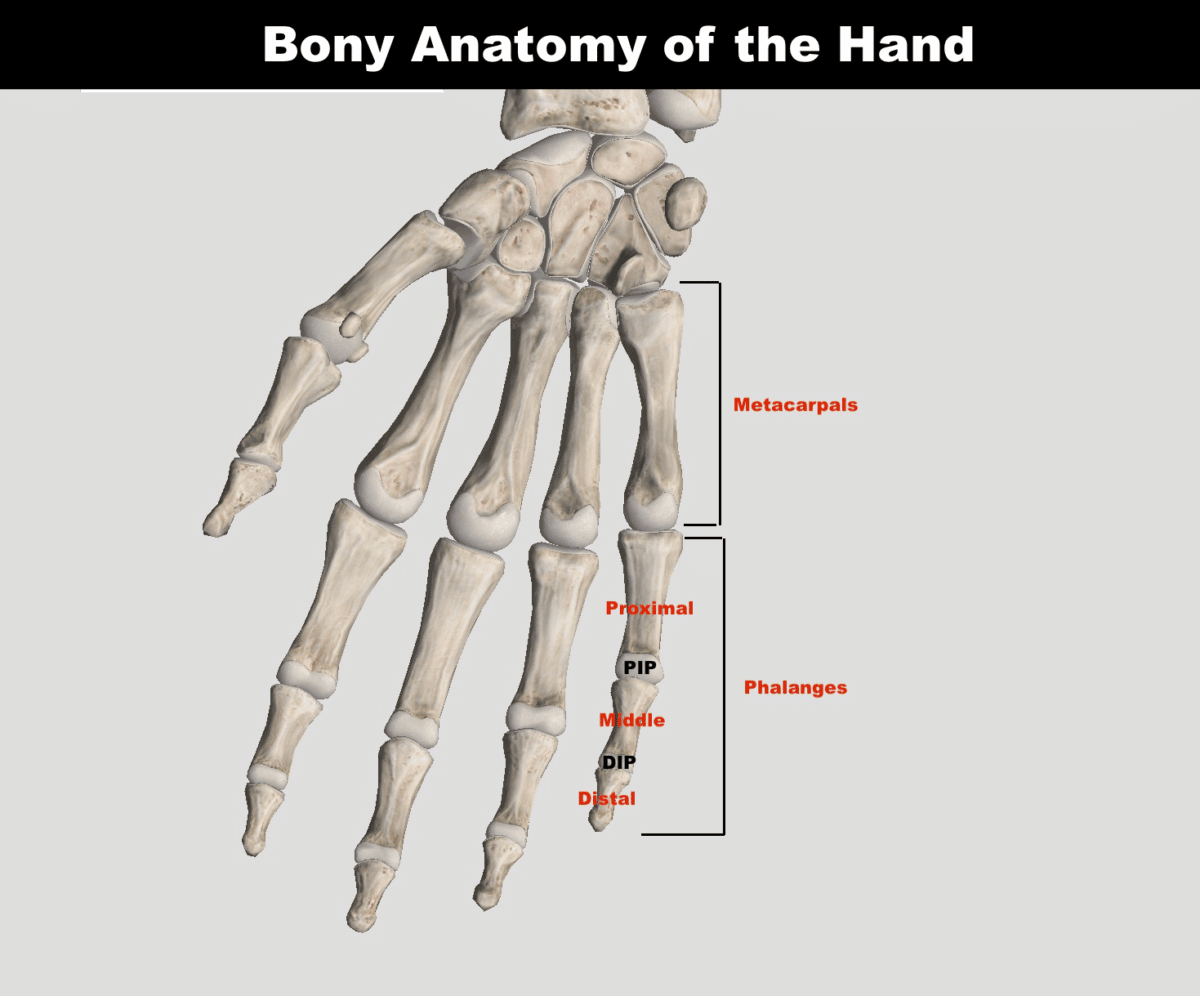 What is a Pulley? 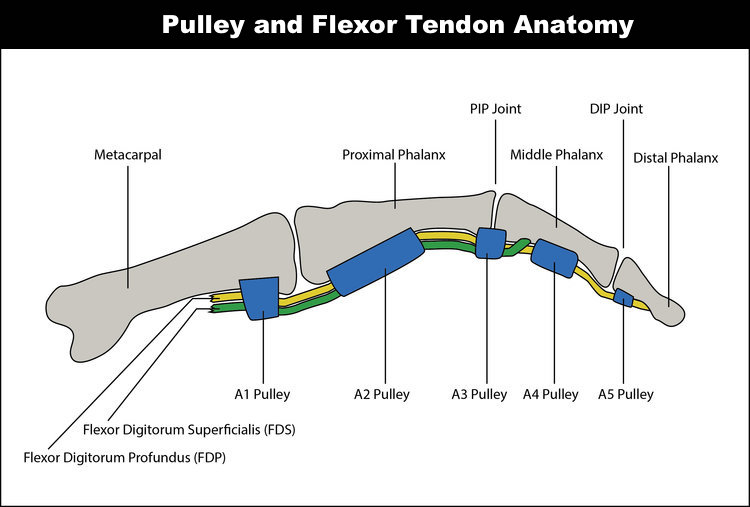 The muscles responsible for flexing our fingers originate in our forearm, but their tendons course through our wrist, hand, and fingers. These two muscles are the Flexor Digitorum Superficialis (FDS) and the Flexor Digitorum Profundus (FDP). The FDS stops and inserts onto the middle phalanx, flexing only the MCP and PIP, but the FDP courses all the way through to the fingertip, flexing the MCP, PIP and DIP. In order to create an optimal line of pull for finger flexion, the tendons need to stay close to the bone. 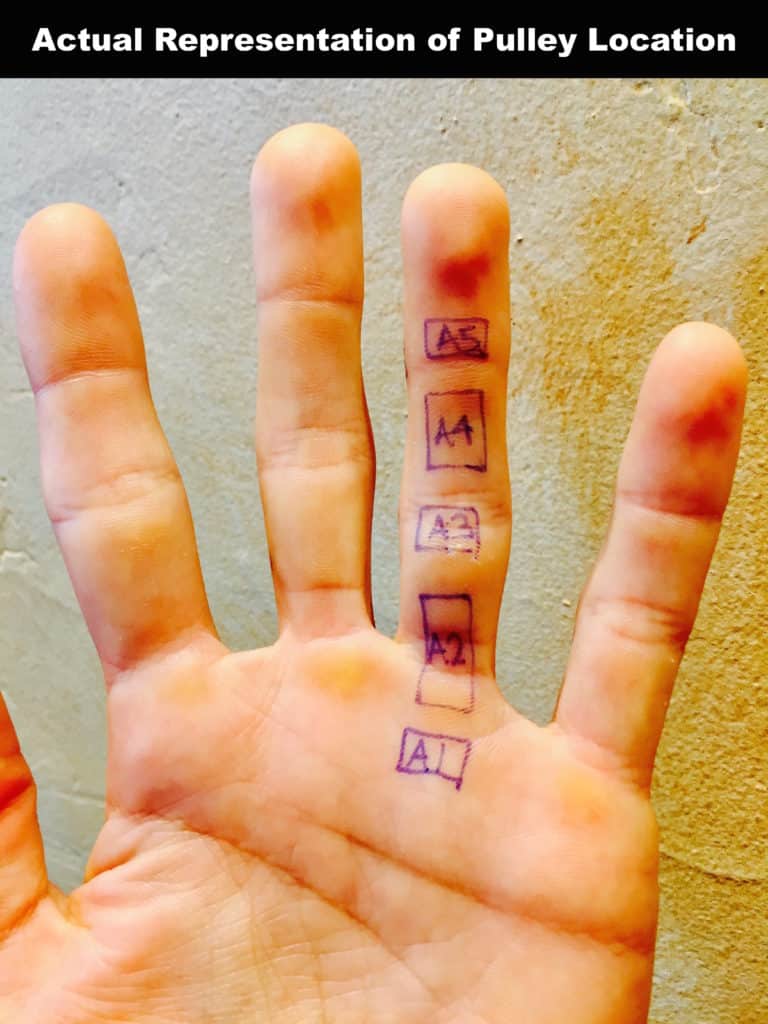 Flexor tendon pulleys (we will focus on the Annular pulleys), named A1 through A5, act as a ligamentous strap to keep the tendon in close contact with the phalanges. The best analogy for this is a fishing rod. The eyelets of a fishing rod, like the pulleys of your finger, keep the fishing line close to the rod when it bends. This optimizes the finger flexor tendons’ line of pull, allowing you to grasp and climb. The pulleys create efficient mechanics for your fingers by maximizing the amount of finger flexion gained per muscle contraction length. Without pulleys, the tendon would pull away from the joint’s axis of rotation during flexion and decrease the functionality of the system.5 In addition, the pulleys allow us to fractionate movement at our finger and selectively flex either the PIP or DIP joints. The A2 and A4 are the major pulleys of the system (inserting directly to the bone) and are most prone to injury. The A1, A3, and A5 pulleys are more flexible and attach to the volar plate, a ligament that connects two phalanges together. The most common injury in climbers is the A2 pulley sprain or rupture and is caused by overloading the tissue. If multiple pulleys rupture, this may present with what is known as “bowstringing.”5 To understand what bowstringing is, envision a bow (as in bow and arrow). The string goes from one tip of the bow to the other, unlike the fishing rod that has eyelets to keep the line close to the rod. A climbing specific example that helps to visualize bowstringing of the pulley tendons is climbing an overhanging wall and clipping only the first draw and the last draw before the lip. The rope not staying flush with the wall represents a bowstringing tendon. (See the images above and below to wrap your head around the concept). (Note: an obvious bowstringing is possible only after a rupture of the A2, A3 and A4 pulleys combined.) Our soft tissues only have so much strength and tolerable load, and past this point we may rupture ligaments, pulleys, tendons, etc. Following this logic, the A2 pulley can only tolerate a set amount of force until it fails, leading to strain or rupture. It is important to note that the A2 pulley holds both the FDS and FDP tendon, which is partly why it experiences greater forces than the A4 pulley. The amount of force placed on the A2 pulley depends on two main factors: 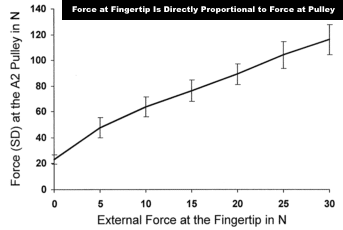 Another important message to convey here is related to how these biomechanical values were obtained. In these studies, the subjects were statically holding an open-hand grip and a crimp grip, and the forces were measured. For research purposes it is easier to control or quantify force during a static grip compared to dynamic movement where forces are more variable. But think about how you climb: you aren’t only gripping a hold statically, but you usually pull dynamically off of that hold. This adds to the external load at the fingertip, thus increasing the force on the A2 pulley.

My friend and I conducted a backyard experiment to measure the difference in force generation of holding a crimp statically versus pulling off of it dynamically. What we found was that the force on my fingertips increased by roughly 62% (47-76 lbs) when pulling dynamically off of a crimp. The backyard experiment demonstrates that pulling off of a hold increases the external force on the fingertip and thus increases the demand on the pulley. This is based on the knowledge that the force acting on the pulley is directly proportional to the force at the fingertip.

One additional note regarding the crimp grip posture is related to the DIP hyperextension. In the photo of the crimp grip above, I point out the amount of PIP flexion because that is one of the most important parameters leading to injury. But you’ll also notice an increased amount of hyperextension at the last finger joint. This increases the tension in the FDP tendon, thus adding more force to the system and the A2 pulley.7 This hasn’t been shown to be as important as the angle of PIP flexion during a crimp, but it does influence the forces applied to the pulley system.

Is this to say that you should never crimp, or pull dynamically off of a crimp? No. We all do it. It’s just bringing attention to the forces on your tissues so that you may climb and train with more awareness and hopefully prevent injuries. We will discuss injury prevention in Part 2 of this article.

What to expect from Part 2:

The information provided in Part 1 was aiming to give you a solid understanding of finger anatomy and the forces acting on your fingers when you climb. As you can imagine, these forces may lead to injury of the soft tissue in your finger, predominantly the A2 pulley. By understanding the biomechanics behind an injury, it can help avoid injury in the future. Part 2 of this article will include specific information on pulley injuries including injury type (sprain vs. rupture) and the grading system (Grades I-IV). It will also discuss treatment techniques for dealing with pulley injuries and prevention strategies to help avoid pulley injuries from occurring. Click this link to read part 2 of 2. 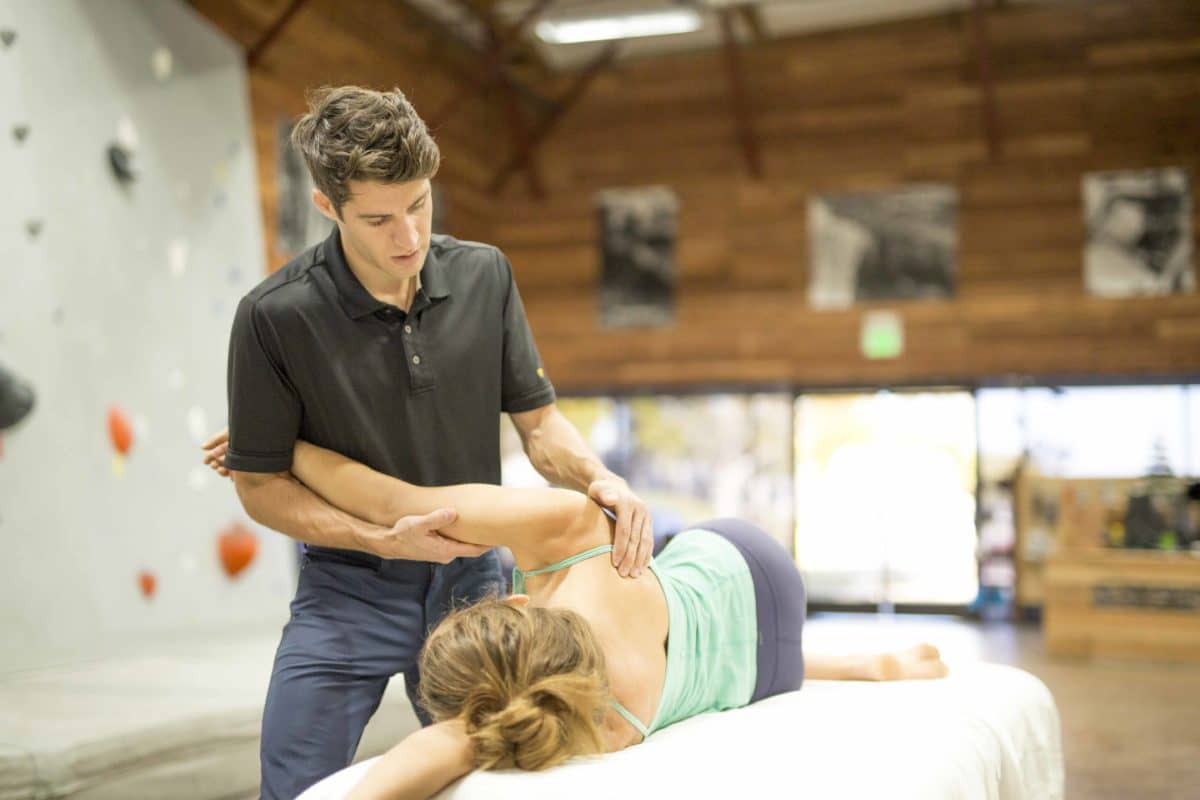 Matt is a 3rd year Doctor of Physical Therapy student at the CU Anschutz Medical Campus. He lives in Boulder, CO to be closer to his playground. This is his final semester of the DPT program and he is undertaking an independent study researching climbing injuries and injury prevention techniques to provide to his clients. His main interests are in sports medicine physical therapy and injury prevention revolving around the climbing athlete. Before starting school, Matt lived in San Diego, CA and worked at Mesa Rim Climbing and Fitness. After graduating from his DPT program, he plans to return to San Diego and work alongside Mesa Rim to give back to the community he loves.